On 19 September 2011 7 members of the 84th Entry and some wives and partners met at The George Hotel, Stamford to mark the 55th anniversary of their attestation day. One of them was there under false pretences as he didn't attest with the 84th but with the 28th Entry of Boy Entrants just over three months' before at RAF Cosford. Two wives also attended making nine altogether. Those present were Chris Armes, Roy O'Connell, Stan Folds, Ray Thorne, Dave Stewart, Tony Mooney and his wife Judith and Mike Shilcock and his wife Chris. Mike had only been located in the previous week and it was especially pleasant to welcome him to the fold.

Tony, Ray and Judith drove up from Moggerhanger and joined Roy, Stan and Dave in the bar. It was crowded owing to other events taking place that day. So, they moved out to the court-yard and found a table near the arched entrance. Soon Chris arrived but it was not for some time that Mike and Chris Shilcock arrived. We all spent some time getting acquainted and eventually moved to the panelled dining room to order our meal. Roy, sadly, couldn't join us as he had to leave to return home where his wife, Darryl was busy preparing a birthday surprise for him. He was attested on his birthday!

Lunch was fine, well presented and served to a high standard. We all chatted with our neighbours but after coffee we started talking as a group and the yarns and memories flowed for what seemed like forever. Eventually Dave had to go to start his four hour drive home to Sunderland. Soon after he left we noticed the time; it was a quarter to five! We settled the bill made our goodbyes and slowly drifted away. 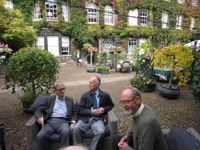 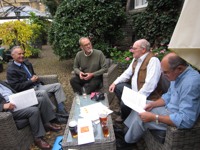 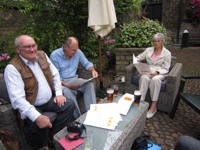 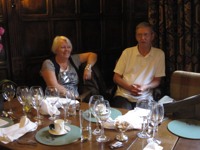