Every apprentice knew Hamish McCrackers the Apprentice Wing mascot but few of them would be familiar with his service record. We have discovered two articles which cover his background from his enlistment in December 1953 to his promotion to SAA on 8 February 1964. It’s all contained in two extracts from the Locking Review.

The first article covers how he came to be the Apprentice Wing Mascot and his first year at Locking. The second article covers his life from birth to his promotion to SAA – much of it in his own words.

Hamish had to be put to sleep in May 1964 and was replaced by Heathers McCrackers. The Weston Mercury carried a photo and caption on 31 July 1964 showing that Heathers McCrackers had ‘made his (sic) debut on parade’ as Hamish’s replacement. The 104th Entry website has a few more details of Heathers here. All the references to Heathers use the pronoun ‘his’ so the new mascot must have been male. It is not known what happened to Heathers McCrackers but eventually Apprentice training ceased at No. 1 Radio School.

Who was Sgt Sparky McDougal? 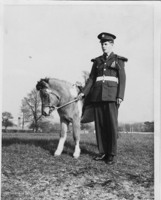 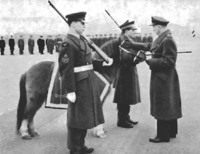