We know very little about what happened to Dick Cheeseman after he passed out from RAF Locking. We do know that he was commissioned into the Education Branch and that he served in that capacity at RAF Locking at some point. He wrote an article called The Locking Apprentice which was published in Airwaves in June 1993 on the occasion of the 50th anniversary of the foundation of No 1 Radio School. He died in 2003.

Both Dick and I became members of the Radio Technical Publications Squadron (RTPS) at RAF North Luffenham in the early 1970s where we were employed as Technical Authors producing servicing and maintenance documentation for ground radar and ground wireless equipment as befitted our basic trades.

It was from North Luffenham that Dick initially applied for commissioned service and he duly departed for the OCTU at RAF Henlow.    As was the practice in those days, on commissioning, details of the successful graduate were sent to the individuals’ local newspapers.   As Dick had bought a house in Stamford, which was very local to North Luffenham, a pen -picture of Dick, and a photograph, duly appeared in the next edition of the Stamford Mercury.   Unfortunately, the incorrect picture attached to Dick’s pen-picture was of a gentleman who was of Afro-Caribbean origin!!

Needless to say, amongst the merriment this article caused, some wag at RTPS cut out the piece and posted it on the Squadron notice-board with the rider that “Warning: see what happens to you on the officer training course”.

Dick, you will always be remembered for your quiet humour and your well-rounded personality and character and just for being a good bloke. 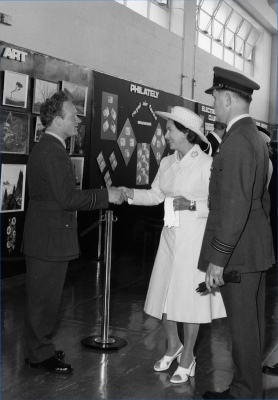