Mike Shilcock attended the funeral service and sent the following:

“I attended the funeral of Mike Barnes on Friday 15th June 2018 and we all waited outside of the church in the sunshine waiting for the fly pasts which were provided by RAF Lynham Flying Club and No 47 Squadron.

In order to accommodate the large number of people present extra seating had been provided at one side of the church. I estimated approximately 100 people were present. When I entered the church I realised that there were few if any empty seats but spotted one at the end of a pew 3 or 4 rows back. The gentleman I sat next to me  introduced himself and I realised that he was the son of Tug Wilson who would be giving the reading.

Following the first hymn the Tribute consisted of memories of Mike by his 4 grandchildren, his son and daughter.

Outside of the church after the service talking to Tug Wilson and his wife and son we found that we had all spent time in Singapore overlapping with each other and at the time when Mike would also have been there.”

Mike sent a copy of the Order of Service, a photo of the Lyneham Flying Club’s flypast and a short video of 47 Squadron RAF Brize Norton’s flypast.

Order of Service and Photos 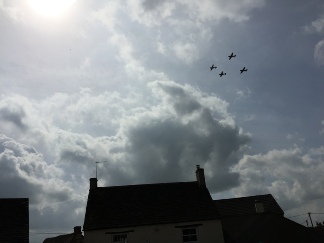