Over the years since Tony Beard set out the trace our members in anticipation of our 50th Anniversary celebrations our members have unearthed many items of memorabilia and allowed them to be shown on this website. You will find them on the members’ pages. Some items have been donated to the 84th Entry Archives held by Tony Mooney.

When RAF Locking was preparing to close down it gave the contents of the entry box it kept for each entry to the RAFLAA.  All the boxes were looked after by an ex-apprentice custodian for some years but the day came when he needed his loft for other purposes. At this point the RAFLAA asked its membership for volunteers to look after the boxes. Tony Mooney volunteered and has been the custodian of the 84th Entry box since September 1999. Tiny Kuhle, Chairman of the RAFLAA, said to him on 18 July 2018 that they had no guidance on what to do with the various entry boxes and Tony could dispose of his as he saw fit.

Some time ago the RAFLAA arranged for some memorabilia to be put on display at the RAFA Club in Weston super Mare. 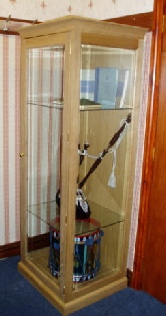 The Display Cabinet is now installed in the RAFA Club at Weston Super Mare. All donations or loans of Apprentice Memorabilia would be appreciated.

Tony Mooney visited The Helicopter Museum on 18 July 2018 and viewed the RAF Locking Display in the Aviation Room next to the Control Tower. There is a good display of the Station and its association with Weston-super-Mare together with much information and memorabilia about Apprentices including some, if not all, of the items listed above. Tony took some photos of the displays which can be seen here.

The following two photos are copies from the RAFLAA Newsletter for July 2017 published there by courtesy of Tony Horry. The photos were taken at the Helicopter Museum in Weston-super-Mare recently. The items are in the ‘Apprentice days at Locking’ exhibition in the old Control Tower. 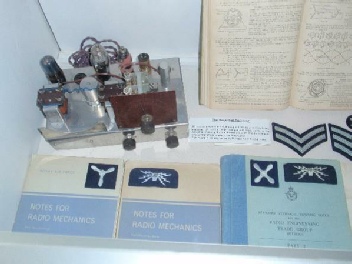 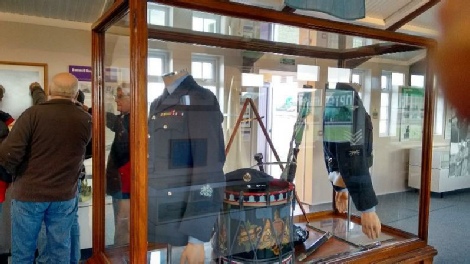 The extract below from the same newsletter explains further:

… archival material, much of which had previously been held and/or exhibited at RAFA Weston-super-Mare. Treasurer added to the report from Rick and stated that much of this material had been assigned to the Helicopter Museum situate at the former Weston Airfield. The Museum had received some lottery funding and had developed the former control tower as part of the Museum. It was to the Control Tower that much of the donated memorabilia of ‘Apprentice days at Locking’ was now exhibited.

Asked whether it was possible yet awhile to visit the erstwhile Control Tower Treasurer replied that when open the whole Museum included the Control Tower. He added that 91st Entry Member, Ian Davies, was a very active member of the Museum team and had liaised with him on many occasions.

A number of items have appeared in the RAFLAA Newsletter about the Apprentice Records at RAF Henlow. These records, comprising three filing cabinets, were in the care of the RAFLAA and seem to have been first stored in the Serco offices at RAF Henlow about 2001/2. They were moved to the Signals Museum, also at RAF Henlow, a few years later. Further items in the Newsletters report they were to be transferred to the RAF Museum at Hendon and that they were expected to be sent by them to the RAF Halton Museum which had a manned office at the time. At that point the RAFLAA ceased to be responsible for them.

In a conversation with Tony Mooney on 11 April 2017 the Curator of the RAF Halton Museum said that they had not received the items from the RAF Museum.

I’ve been looking at some old RAF Locking Apprentice Association Newsletters and came across your name in connection with the Locking Apprentice Archives which were at one time at RAF Henlow. Can you tell me anything about them and maybe what happened to them

One of the Curators, Vic Ludlow (68th Entry), replied:

There were initially some documents - files, etc - that came from Locking to the Signals Museum, RAF Henlow, and were then transferred by us to the RAF Museum.

There are one or two physical items, such as a board with the 'Band Masters' on, that are with us at present in the Signals Museum at RAF Henlow. However, the Museum has to be closed at the end of this year, consequent upon the sale of RAF Henlow for 'house building'. The RAFLAA has already asked about the items that are with us, in connection with the setting up of the Community Centre in 'the Chapel' at Locking.

Dave Gunby wrote in the February 2002 edition of the RAFLAA Newsletter:

On Thursday 17th October, a visit was carried out by some committee members (Tiny Kuhle, Vic Gibbs and myself). The visit was arranged by Joe Holroyd and was supervised by Vic Ludlow (Duty Curator). Approximately 2 hours was spent looking at the problem of presenting information for members wishing to trace their former colleagues. Looking through each entry file was not an option in the time, but we were able to assess what needed to be done.

Existing in the Museum was a large ledger containing original class lists as at attestation of Entries 60 to 87 and 91. Stuck over these lists were further class lists as at third term assessments. The ledger is in poor condition, pages torn, manuscript amendments, faded type and suffering the effects of damp.

This ledger is now on loan to me, and I am creating a database from the data therein. The task is quite time consuming but I am making good progress to date. I estimate that the information in the ledger will be on the database by the end of this month (December 02).

The information on the database comprises:

Service Number, Surname, Initials and a Comment column. By way of explanation the Comment column contains info regarding progress, or otherwise, through the apprenticeship. As things stand at the moment the comments refer to transfers to other entries, transfers to other forms of training or discharges. With regard to the latter, no differentiation is made between the reasons for discharge as I think that there may be some sort of stigma attached in certain individual cases. To complete the picture I now need the passing out lists to add to the comment column.

N.B. The information in these class lists cannot be relied upon 100% as I have found anomalies in service numbers, surname spelling and initial variations.

Information regarding the original class lists for entries other than 60-87,91 is yet to be gleaned. In the meantime, any member of the Association wishing to have a copy of their particular entry list that I have produced should contact me.

On 21 July 2018 Tony Mooney attended a Veterans’ Breakfast at Jordan’s Mill, Broom, Bedfordshire. There he met Ray Thompson of the 88th Entry who has been a volunteer at the Signals Museum at Henlow for many years. Ray helped pack up the apprentice records in three crates when they were disposed of. They were given to the RAF Museum but sent direct to their storage facility at Stafford. Ray said that the consignment consisted of various lists, including Entry lists and many other records. Furthermore, he said that an inventory was not made.